Even before we made the move this year I knew I would really need to get rid of a lot of things.  Especially when it comes to my crafty stuff.  But how do you just get rid of it?  When we finally did find a house and it was considerably smaller than what we were in I knew it had to get done.  Still not done but at least the plan is starting to come together.  I came across this tonight while waiting for some pictures to upload and it is what I want to attempt to get my craft area down to. 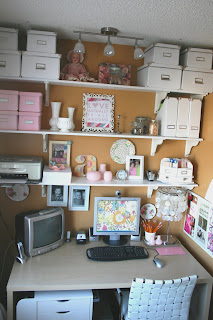 Going to take me a while I know.  I am slow as Christmas these days (unless it involves getting a house ready to sell...which I in no way, shape or form want to happen anytime in the next 10 years!).  So much going on just trying to get situated int he new place and still so much unpacking to do. BUT...after seeing these photos I think I am ready to get started once we get through the next 2 crazy weeks.
I just want a cozy corner to work in.  And really need to learn to just get the things I need for a project and not keep so many things for "later."  This is such a hard habit to break though!  Wish me luck.  :)
Posted by Unknown at 10:39 PM 1 comment:

And I mean in bed down.  For 2 whole days just about.  Wow.  I don't know what hit me but I couldn't even stay awake.  It has been crazy!
I have been meaning to share this for a while so here goes.  I wish, oh how I wish, I had time to edit more of my photos.  Just a few minutes of changes makes such an amazing difference!  These are 2 shots from when we went to the beach last month and I knew immediately these were 2 of my favorites.  A few tweaks and voila!  What do ya think?  You have to love how easy Photoshop Elements makes things!
Before 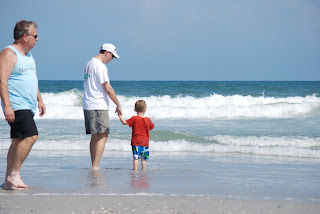 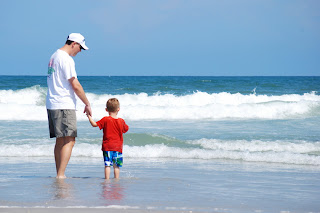 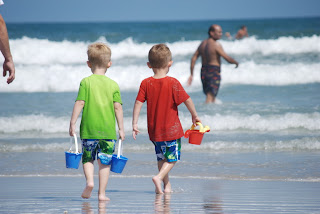 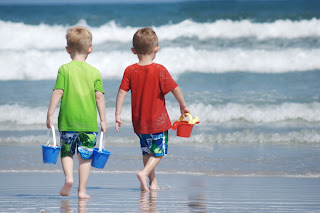 Tomorrow's the day!  Praying the people are here and installing the play set for the boys and we get no rain.  Although in reality we really need the rain but if it can wait a few more days I would be ever so grateful!

Got tickets for next week to take the boys on a train ride for A Day Out with Thomas.  They are going to be so thrilled.  Doing it as a surprise and can't wait!  This will be the first time we have ever really surprised them with something like this so will be so fun and hopefully I can capture those sweet little faces on film when they see him.
Posted by Unknown at 11:21 PM No comments:

﻿﻿﻿﻿ ﻿﻿﻿﻿I am seriously itching to do this.  Seriously.  Like I am becoming obsessed with it since so many people out there in blogger land are doing it.  I keep trying to peek under my carpet on the stairs and after seeing this post I am seriously, seriously thinking the time may have come for me to just rip it up and see what is underneath.  Have I ever mentioned how much I have come to HATE carpet.  I truly have come to despise the stuff.  Love area rugs but am hating wall to wall stuff.

After having spent so much time on the floor with the boys these last 3 years I have seriously come to despise this stuff.  One of the things I was really hoping when we found out we would be moving again was that we would be able to find a place without any carpet.  Obviously didn't happen.  And to make matters worse we got that same shag Frieze carpet they are doing now...everywhere.  I mean I can't get away from the stuff!  And the people who owned this  house before us had cats...like 4 of them.
Posted by Unknown at 11:29 PM 2 comments:

Where are you Fall?

Where oh where is Fall? Please send it our way. Please. I am longing for cooler days we can spend the entire day outside and just enjoy being there. No worries. And the boys are getting their play set next week so even more reason to have those cooler temps roll this way! I think I am more excited than they are. Seriously. I have wanted to get them on for over 2 years now. First we waited because of the move to Indy, then we waited because we had no grass in the back yard (mud all the time because of attempting to grow the grass), then we waited because we were contemplating moving, and finally we moved. Just praying we are HERE for a very LONG time. They will hopefully be thrilled on Wednesday when they come home from school. Now I have to figure out how to keep them out of the way while the people finiah installing the thing once they do come home. Hmm...may have to take them somewhere after school...


But I digress. I am longing to do crafty things like this... And this one I can even do with the kiddos... 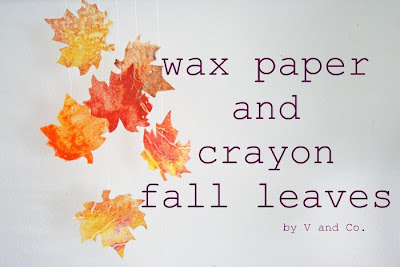 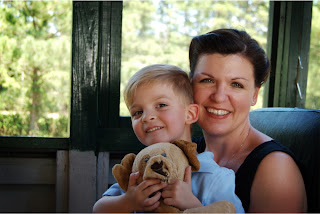 I hardly ever have my picture taken. EVER. I am always the one behind the camera. Every once in a while I am lucky enough someone grabs the camera and I get a shot I love. Or am at least happy with. :) When hubby took the piture he immediately told me it was a good one. And yep, I had to agree. I love Noah's expression and that little puppy he faithfully carries. And I am going to attempt to at least take a picture of me with the boys once a month just so when they get older they really do know they had a mom. :)
Posted by Unknown at 11:53 PM 5 comments:

Noah had his first day of school today and Cameron last week. I can't believe how big they are getting! I was looking through some pictures last night from their very first day just two years ago when they went to "school." Wow have they changed SO, SO much! 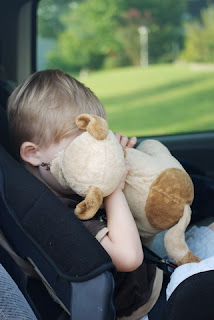 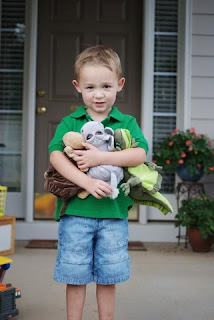 With the boys both off to school this morning I thought I was giong to get so much done. NOT. Well, I did get a lot done but not looking like much around the house. I took the doors off the hinges for our laundry area. This was driving me INSANE! To have three doors in that tiny of a space was a crime. I dreaded doing laundry just because I didn't want to fight with the doors!
I also did some serious planning on where pieces of funriture need to go, took some measurements to see if they were going to fit where I wanted them to go and then did some more planning. Most worked, one would not based on measuring. Blah! Will need hubby to help me move the furniture. Too many bug pieces to move around and my body just can't take it anymore.
We have discovered two cracks in two different rooms along the ceiling. So took some pictures to document that and also had to do some pictures of the boys' mattresses (possibly having them replaced by the company). Do you know how hard it is to take pictures of a white ceiling? Especially with a zoom lense? I know, I know, I should have switched the lens out but it takes so much better photos than my other one. Must get a new every day lens! So, after contorting my bosy in all kinds of ways while laying on the floor to attempt to get decent photos for future documentation I think I finally have a few that will work. Lovely.
The only thing I did today that actually showed any physical evidence was laundry, moving some things from the dining room that need to be gone through and either put away or taken care of and changing sheets on beds. Ugh! Pitiful display.
So why is this bothering me? I think just having the house is such a state of disarray has really been bothering us all. It makes me feel tense and like I just don't want to be here at the house. So maybe that is why I have been wanting to work on the yard so much...to escape. But I am determined that now that I will have a few hours a couple days a week I am GOING to get this done. It may take me the next six months but I will get this house back to being presentable and comfortable again. And my latest plan involves possibly sticking everything in one room and uncovering a little each and every day. Just so the rest of the house is peaceful again. Sound like a crazy plan? Am I going to hate myself later for doing this?
Posted by Unknown at 11:13 PM 1 comment: